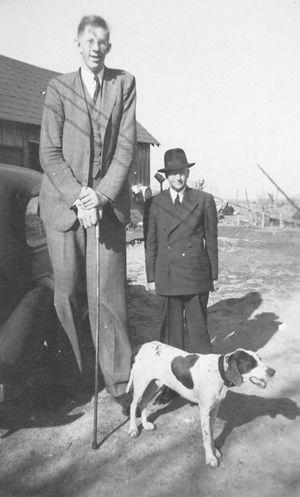 Robert Wadlow was just a shade under nine feet tall and wore size 37 shoes, which had to be custom made at a price of $100. He was born in 1918 to average-sized parents and passed away in 1940, at the young age of 22. This photo was taken at the Heuer farm (Robert appeared at the Heuer Shoe Store in Harrison) in the 1930s by Elmer Griever.

Donald Heuer recalled the scene in many small towns of Arkansas during the 1930s. Some folks came by wagon, he said, a few by cars. Others walked. Others rode a horse or mule. They all wanted to see Robert Wadlow.

In many respects, Wadlow was just like any other young man. He loved sports and music. He was a Boy Scout, and he belonged to the YMCA.

Wadlow also happened to be the world’s tallest man. When he died in 1940, at the age of 22, Wadlow was just a shade under nine feet tall. Not surprising, his feet matched the rest of his body. Wadlow wore size 37 shoes, which had to be custom made at a price of $100, a lot of money back in the Great Depression.

The International Shoe Company of St. Louis signed Wadlow to be a company spokesman and ambassador. Along with his father, Wadlow visited 800 towns in 41 states. In all, the father and son drove more than 300,000 miles.

Included in his many stops was Harrison.

Robert Pershing Wadlow was born in Alton, Illinois, in 1918 to normal-sized parents. By 18 months, though, Wadlow weighed 67 pounds, and his growth became astounding. At the age of 14, Wadlow was already 7 feet, 7 inches tall. At the time of his death, doctors said Wadlow’s body was still growing.

Wadlow’s size was attributed to an over-active pituitary gland, which produced higher than normal growth hormones. Today’s medical science can compensate for such problems, but in the 1920s, no such remedy was available.

Those who knew him described Wadlow as “shy, friendly, respectable and tall in character.” Though he loved music and photography, he had to abandon those interests after his hands grew too big for his guitar and camera.

“He was my friend,” Heuer wrote. “I had the privilege of traveling with his group to small towns as Mountain Home and Harrison in Arkansas and Hollister and Branson in Missouri. Almost all highways between the small towns in Arkansas were joined by dusty, washboard, loose gravel roads. For Robert and his dad to travel these roads as much as they did leads me to believe they enjoyed the people in Arkansas.”

On July 13, 1935, Wadlow appeared at Heuer’s Shoe Store in Harrison. An ad in the Harrison Daily Times called Wadlow “the Man Mountain.” Touting Wadlow’s appearance and stroking the egos of prospective customers, the ad went on to say, “You may not be a ‘Man Mountain,’ but you’re big enough to know shoe values when you see them.”

Wadlow and his father, on at least one occasion, stayed at the Heuer farm near Harrison.

“Robert liked to come to our house for dinner,” Heuer wrote. “Our living room had a high arched ceiling he could stand up in. After dinner, we played Chinese Checkers. Robert could read a book, play checkers and beat us most of the time. His dad watched his eating closely. ‘Ah, Dad, one more piece of pie,’ he would say.”

The Boone County Heritage Museum has in its collection a series of photographs taken by Elmer Griever during the 1930s. Included in the photos are several of Wadlow during his stay at the Heuer farm. The photos show a meticulously dressed young man wearing wire rimmed glasses and carrying a long cane.

Other newspaper ads for Wadlow appearances included a March 21, 1940 notice for an event sponsored by Dryer’s Shoe Store in Huntsville. On September 1, 1932, a 14-year-old Wadlow appeared at the Berryville Mercantile.

For the most part, Wadlow enjoyed good health, although his large feet gave him trouble. He had no feeling in his feet and was not aware of any chafing until blisters appeared. While making an appearance in Manistee, Michigan, in July, 1940, such a blister appeared and became infected. Despite emergency surgery and blood transfusions, the infection worsened and his temperature continued to rise. At 1:30 a.m. on July 15, 1940, Wadlow passed away in his sleep. He was buried in his hometown of Alton, Illinois.