Written by David Holsted, published in the Harrison Daily Times on July 23, 2020

Residents of the small Ozarks towns and villages would later recall young Bert Hoover as “a wiry young man who tended to business and avoided the local square dances.”

Bert was Herbert Hoover, who would later serve as the 29th president of the United States from 1929 through 1933.

In 1892, Hoover was a student at the newly opened Stanford University. Strapped for cash, as many college students are, Hoover was in need of summer employment. One of Stanford’s geology professors, John C. Branner, was able to get Hoover a job as an assistant on the Geological Survey of Arkansas. Branner had once been the State Geologist of Arkansas.

In her article, “Stanford Techie,” Elena S. Danielson said the job “involved lots of camping and tramping in the Ozarks. For someone more comfortable outdoors than in the parlor, it was ideal, with no small talk.”

Hoover spent the summer mostly in Searcy and Newton counties, mapping the geologic outcrops of the Ozarks. The $60 a month plus expenses for three months seemed like a fortune, Hoover would later say. In his autobiography, Hoover would write about his experiences in Arkansas.

“I did my job on foot mostly alone, stopping at nights at the nearest cabin,” he said.

The sight of the serious Hoover studying rock formations raised a few eyebrows.

“The mountain people were hospitable but suspicious of all ‘government agents,'” Hoover wrote. “Some were moonshiners and to them even a gawky boy might be a spy. There were terms that could adequately explain my presence among them. To talk about the rocks only excited more suspicion. To say that I was making a survey was worse, for they wanted no check-up on their landholdings. To say I was tracing the zinc- or coal-bearing formations made them fearful of some wicked corporate invasion. I finally gave up trying to explain.”

Despite the suspicions, Hoover never failed to find someone who would take him in at nightfall and who would often refuse any payment in the morning.

Hoover, who as president would witness the effects of the Great Depression on many Americans, saw a lot of poverty in the Ozarks during that summer of 1892.

“The living conditions of many of these people were just as horrible as they are today,” Hoover wrote. “Generations of sowbelly, sorghum molasses and corn-meal, of sleeping and living half a dozen in a room, had fatally lowered their vitality and ambitions. The remedy — then as today — is to regenerate racial vitality in the next generation through education and decent feeding of the children.”

Several of Hoover’s reports are still on file at the Arkansas Geological Commission in Little Rock.

According to Arkansas.com, the town of Leslie was first surveyed by Hoover.

In 1896, Branner and Hoover found outcroppings of lead and zinc in the Ozarks.

The Benton County community of Hoover, which no longer exists, might have been named for Hoover, who surveyed the area 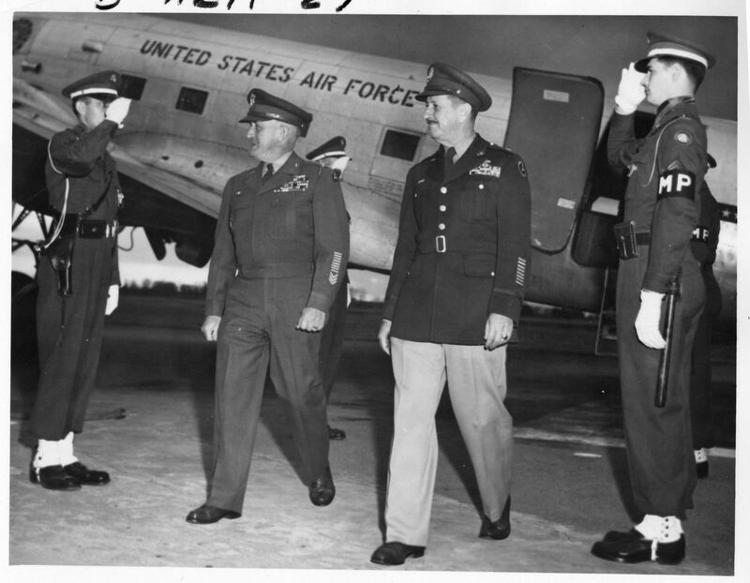 Crump Garvin (second from right) arrives at the Dothan, Alabama, Municipal Airport to take command of Camp Rucker. Garvin, a native of Harrison, was in charge of supplies during the Korean War.

Written by David Holsted, published in the Harrison Daily Times on July 16, 2020

In the spring of 1951, Communist forces in North Korea began their spring offensive. U.S. Army Major General Crump Garvin, for one, was glad to see it.

“It will get them out in the open,” Garvin said. “You can kill a lot more of them that way.”

The outspoken general from Harrison, Arkansas, was on a roll.

“It would appear to me,” he said, “that they need one more good whipping before they’re ready to do any talking. Of course, China has a puppet government. The Politburo and Uncle Joe Stalin have to decide when the talking will begin.”

Garvin uttered this pronouncement in April, 1951, in Little Rock, where he was visiting his brother, O. W. “Pete” Garvin. Since July 4, 1950, Garvin had been in charge of supply at the South Korean seaport of Pusan.

The difficulty of Garvin’s task as supply officer was immense.

“But the GI Joes of the United Nations forces had to be served, even though the supply lines from Pusan into the interior ran over perilous mountains and rain soaked terrain during the summer months and almost impassable trails and snow and sleet-swept valleys in winter, with mercury almost frozen in thermometers.”

Garvin was born in 1898 in Harrison. His parents were Ford M. and Mintie Crump Garvin. His grandfather was George J. Crump, one of Arkansas’ earliest lawyers.

While in command at Pusan, Garvin took particular interest in the 936th and 937th Field Artillery groups. The men were from Arkansas, and Garvin watched them as they prepared for battle.

“They are both fine outfits,” Garvin said. “The spirit was high and they wanted to get right into it. They were two of the best outfits I saw, and I saw all of the men going into Korea.”

Commenting on the war effort in Korea, Garvin said the morale of American troops was improving. Supplies were coming through better, and morale was boosted by advances made against the enemy.

“We still think we can give them (the Reds) a good licking,” Garvin said emphatically.

While in Little Rock, the general and his wife saw for the first time their grandson, George Handley III, who was born at Adams Field. The boy’s mother was Kakii Garvin Handley, who was the Cotton Bowl queen in 1947. George Handley Jr. was a captain, stationed at Fort Sill.

The Garvins’ other children were First Lt. Ford Garvin and First Lt. Daniel Garvin, both stationed in the Far East with the Air Force.

After visiting friends and relatives in Arkansas, Garvin went to Camp Rucker in Alabama, where he took over as commanding officer.

On May 4, 1951, the Enterprise (Ala.) Ledger did a feature on the new commanding officer of Camp Rucker.

“And in the shade trees that stand like silent sentinels keeping their vigil over a passing world, old timers still watch the sun go ’round the cannon in the square in front of the courthouse and talk about the yesteryears when Crump Garvin’s folks were perusing the local public prints for news of the Spanish-American War.

“The man of whom this quiet Arkansas county seat of more than five thousand friendly folks are proud is none other than Major General Crump Garvin, proud possessor of the Distinguished Service Medal, the Legion of Merit, the Bronze Star and the Commendation Ribbon.”

Garvin died on September 10, 1990, in Atlanta. He was buried in Marietta (Georgia) National Cemetery.